I’ve read a lot of try-hard books lately. Or more accurately, I’ve attempted to read them. After three years of over-analysis in lecture theatres and libraries, books start to become merely a product to pull apart and judge, rather than the cosy old friends of my childhood (when I would routinely romanticise the process by trying to find a window-seat to curl up in – or at last the end of the sofa nearest the window.) Books used to be an irresistible chance to float away on a story and become completely embroiled with its characters; from Frances Hodgson Burnett’s tragic and hopeful A Little Princess – dogeared with re-reading, even in adulthood – to Noel Streatfeild’s charming Ballet Shoes, I devoured my houseful of books. Wherever myself and my family went, we brought far too many books, and there were even books I associated lovingly with my grandparents’ houses. My childhood reading just preceded the trend of absolutely everyone reading a series (think Jacqueline Wilson, Harry Potter, Horrible Histories) and I like to think I chose and loved my books free from PR tactics and peer pressure.

So how I came to be two years out of an English Literature degree, a self-confessed bookworm but secretly, thoroughly out of love with reading – I don’t know. When you’ve learnt to take apart a piece of music bar by bar and question the composer’s motives and influences, it never quite sounds the same. And so it is with books; I find myself unconsciously picking up on Shakespeare-derived sayings, Austenian plots, oxymorons, repeated words, mixed metaphors, overpunctuation, streams of consciousness and the influence of postmodernism, when really wishing I could go back to finding characters, stories and little worlds created seemingly for my entertainment alone. Post-degree, I also tried to go for prize-winners, dark themes and inaccessible styles to continue my analytical education, when really I should have been letting myself back into the groove of enjoyable bookwormery with that elusive of genres, the Great Read. Only two GRs have this year sliced through the pedantic layer of academia that still obscures my reading: the first was the beyond-charming The Guernsey Literary and Potato Peel Pie Society (highly recommended) and the second was my most recent commuting - and lunch hour, and bedtime – book, the newly-published Turning the Tide by Christine Stovell. This book has, quite simply, made me hate having a job and a life. What I wouldn’t have given to have an empty weekend to sit and read it from intriguing beginning to satisfying end (it definitely warrants a re-read.) But then again, it just may be the perfect commuter's novel. With the artful suspense of a six-part TV drama – a form which I think it would suit perfectly – the plot ebbs and flows with each chapter, giving you a little more information with each burst of reading.

When smooth-talking hottie Matthew Corrigan starts nosing around the sleepy seaside town of Little Spitmarsh, its bored residents are stirred by his plans for a chic new restaurant on the waterfront, to be followed by apartment blocks and a new-look waterfront. Many think a change is just what the town needs, but tomboy Harry Watling is distraught at the thought of her scenic childhood haunts and the tiny boatyard she inherited from her father being swept away by modernization. As Matthew puts his plans into motion, his cool business head is turned by feisty Harry as she becomes determined to make it as hard for him as possible (no pun intended, although there is a more than a dash of sauce to this classic romance.) Any girl who has been single for too long will identify with the confused and restless girl below Harry’s spiky exterior, and rakish Matthew is almost more fanciable than fictional. I was completely absorbed by the comings and goings of the Little Spitmarshers; adorable gay couple Frankie and Trevor trying to start a new life together, Sophia Loren-esque trout-pouting Carmen Moult waxing, plucking and coiffing the locals and gruff ex-naval handyman George with his immaculately kept caravan and tightly-sealed biscuit tin. You wish them all well in different ways, desperate for Harry to use her feminine wiles as well as her fighting spirit, willing father-figure George to come clean about the family secrets of Harry's past, wanting Matthew to soften and see the natural beauty of the place and its most snarling inhabitant. There is even a compelling mini-drama involving the florists’ canine companions Kirstie and Phil. The book’s magic lies in the frankness of its characters, the balance of their perspectives and Stovell’s ingenious ability to add a tiny twist or leak a piece of vital information just at the end of every chapter, making the wait for the conclusion absolutely thrilling. The romance is, perhaps, inevitable but their slow-burning attraction is realistically muddled and complex, making the reader root for them even more.

The bottom line is this is a fabulous summer read – romance, escapism and chuckles galore – but it is also intelligent, exploring business head versus vulnerable heart, natural beauty threatened by modern progress and the pain of losing an idolised parent, all while neatly avoiding cliché and schmaltz. I would love to go to a rugged coastal town and re-read this compelling novel in a complimentary setting, but it was vivid and absorbing even when wedged against a fellow commuter’s shoulder or in a city park surrounded by noisy teenagers and daytime drunks. Huge credit to Stovell’s talent as an author – she paints the quaintest seaside setting, complete with flaws, and makes her reader care about it so fervently that they begin to feel fiercely defensive of Harry and her quirky home. The chemistry between the two lead characters is tangible and the obstacles dividing them excellently placed. Even if you are nautically ignorant, the sailing theme gives you a taste of the freedom and beauty of our native waters, and Harry is the ultimate independent woman, mastering manual labour and tempestuous seas if not her own desires. As the last chapter came to a close, I got off at my station, sat on a bench in the sun and postponed my walk home by ten minutes or so to enjoy the last few pages uninterrupted, a little oasis of sublime romance in my rushed day. I knew from the first time I picked up Turning the Tide that this was a chance to renew my friendship with reading, and I greatly look forward to enjoying more of Christine Stovell's animated and intricate storytelling in the future. If your mind needs a little break from urban life, take a trip to Little Spitmarsh and fall in love with the sensation of diving into a Great Read again. 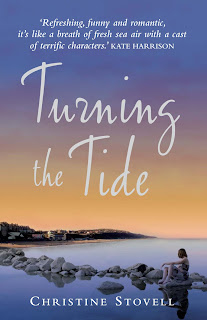