A song came on my iPod this morning that I realized I always skip, but have never deleted. It was Beautiful by Christina Aguilera, now best known for being smotheringly overplayed circa 2003, and subsequently murdered by numerous talent show contestants. But when the song came out, it was a remarkable pop milestone. Not simply for Aguilera's catchy defiance, but for the haunting, controversial video that came with it (directed by Jonas Akerlund.)

A great teacher sat down my entire school year one morning, buzzing with attitude, prejudice and disrespect for their state education, and made us watch every frame. Men kissing, drag queens dressing, anorexics gazing in the mirror - you could have heard a pin drop. Uncomfortable perhaps, but it was a bold move in a school where homophobic bullying was part of the daily dialogue, and so many labels in that video were feared and targeted.

I can remember being absolutely astounded by the video myself, liberal as I was - gay kisses and diversity in general being even less visible in the media back then. I had completely forgotten about that moment until today, and am infuriated that I can't remember my peers' reactions to the video. 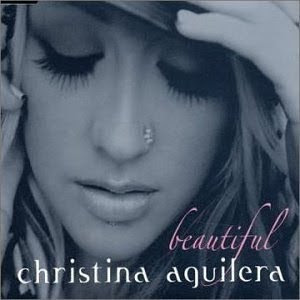 I guess I just want to credit Aguilera for championing love and beauty in all its forms, long before Gaga ever burst onto the scene. Ms Germanotta has done fabulous work raising awareness of issues like Don't Ask, Don't Tell and making a generation of 'little monsters' feel like they belong, but she does it with savvy lyrics and red carpet publicity stunts, rather than anything as daring as the Beautiful video.

The song was recently voted the most empowering of the last decade for gay and bisexual people in a poll by Stonewall (Born This Way came in third.) A cynical person might think that Gaga and Christina's 'people' both identified a powerful gay market to seduce and went for it, but as this type of reaching out isn't typical to Aguilera's back catalogue, I still believe her song is heartfelt. Gaga may be giving the LGBT community something to rave to, but Christina gave them an anthem.

Under the video on YouTube, the following message was posted just yesterday:

I am 18 and gay. I try to make the best﻿ of it but sometimes living in a house of homophobes can bring me down. But when ever I feel awful, I put on this song and feel stronger. I couldn't thank you more.

It is important not to become complacent, thinking the world has moved on since that video. Last week, the landlord of the John Snow pub in Soho, of all places, removed two men on a first date for kissing, reportedly calling their behaviour 'obscene.' Pink News today reported that Facebook has removed a picture of two Eastenders characters kissing (yes, fictional characters) from a blog post in support of the 'kiss in' now being organised in reaction to the incident. My home town's MP and a coalition Minister of State, Chris Grayling, was in hot water this time last year for suggesting that B&B owners should be allowed to refuse gay couples. I can't find one still online of that kiss in the Beautiful video.

Whatever people's personal squeamishness about watching same-sex couples express their affection, there has to be equality when it comes to public places and forums. Get involved, question these things. Don't sit back and let the lifestyle of more than 3 million Britons become erased from our public landscape. Words may not bring us down, but we can challenge the actions of a prejudiced few.
Posted by Miss Write at 12:04 No comments: