I've really enjoyed The Guardian's series of favourite film and album blogs, so I was thrilled to see my personal favourite, Some Like it Hot, pop up today as Becky Barnicoat's chosen flick. This film is cheeky, sexy, silly and hilarious. People who have just heard of it in passing or seen the iconic stills will think this film is popular because of Marilyn Monroe, the same way Breakfast at Tiffany's is cherished mainly for Audrey Hepburn's performance (despite having some iffy acting and some seriously un-PC content.) This is a bit of a myth. I do feel that Monroe is the only person who could have played the voluptuous, lovelorn Sugar Kane, smart enough to go on the run from heartache but dumb enough to fall for an imposter. But it is the script, the pace of the screwball plot and the combination of Tony Curtis and Jack Lemmon that makes this film a classic. 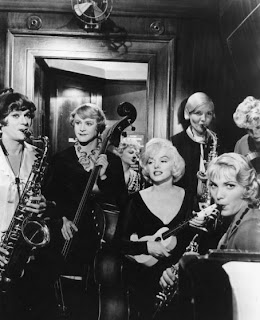 I have had serious love for SLIH since, as a GCSE media studies student, I was told to go away and learn about comedy genres: parody, rom-com and screwball included. Some Like it Hot was the first video - yep, I'm that old - I picked up, and I was instantly enchanted. Two regular Joes (well, one Joe and one Gerry) have to get out of Chicago after witnessing the St Valentine's Day massacre and going on the run from the mob. Their best option is donning some hosiery and lippy and joining all-female jazz band Sweet Sue and her Society Syncopators to escape to Florida. The script is pow-pow-pow quickfire comedy, Tony Curtis is smooth saxophonist perfection (even in drag) and Lemmon's romance with Osgood Fielding III sublimely ridiculous.

There is even some hot jazz along the way, with the sexy Runnin' Wild rehearsed on the train, Monroe's infamously slinky I Wanna Be Loved By You and her desperately sad rendition of I'm Through With Love at the climax of the film. Barnicoat mourns the lack of Technicolor in her blog post, but I think black and white makes this film what it is. Monroe's hourglass silhouette needs no zesty palette to improve it, Joe and Gerry's hastily-acquired drag looks just about convincing, and the whole picture just smokes with romance, mischief and jazz.

If you're in need of a cosy weekend film as winter takes over, or just haven't seen this enduring comedy yet, I would highly recommend it. I might even dig out the old VHS myself...
Posted by Miss Write at 15:28 1 comment: