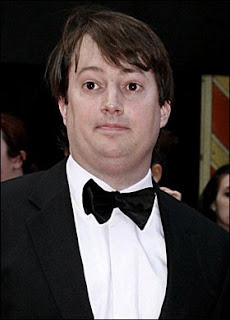 Mitchell: Pedantic, overly articulate, ranting, irritable and sarcastic. And topping many a 'Shouldn't but would' list.

I also have a tricky relationship with cereal. This could be tied in with my milk issues - I like strawberries and cream, ice cream, cream-filled profiteroles, but if there is even a speck of cream in my milk it totally freaks me out. I can't explain it either, but it'll probably come out in therapy when I'm thirty. Cereal used to be a perfectly normal start to the day; I remember when a Kellogg's variety pack was the breakfast hallmark of special occasions and treats, usually involving a tiff over who got the Coco Pops. But these days, if I'm eating cereal I am almost certainly on a rare and short-lived health kick.

I went through a phase in the second year of university of stocking up on Fruit'n'Fibre, which at least attempts to incorporate some tastier fruit pieces, and skimmed milk in a desperate bid to kick my bread habit. Now having given up such dieting efforts at the ripe old age of 21, only once in a blue moon do I deviate from my love affair with toast to delve into the raisin bran. This is odd because the rest of my family are devoted cereal eaters, it is the only proper start to a weekday, usually substituted by more exciting options at the weekend.

But Mitchell is right in saying it is a curious thing to market as enjoyable rather than essential. Anyone who saw this year's Apprentice candidates fudging their way through the breakfast product task (Oh, Pantsman... there is nothing anyone can say that will justify that departure of taste and sanity) will appreciate that essentially you're trying to make puffed rice, brown flakes, and shrivelled fruit exciting and delectable. As I understand it, my option of two slices of wholemeal toast with marmite is just as healthy and fibre-rich, and I even avoid the hidden sugars lurking in the cereal option.

I just can't understand any culinary lust towards a breakfast option which strongly resembles the dried mix you would feed a rodenty pet; if I feel I'm not getting enough fibre or fruit, I'll get involved, but stop trying to make me excited about it.* There's a reason cereal doesn't appear on those food-porn M&S ads: 'misshapen, crunchy, brown flakes.... shrivelled unidentified-floating objects.... this is not just cereal....' 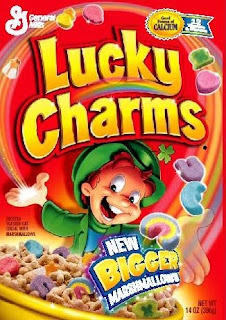 *I'd like to make an exception for Stateside luxury Lucky Charms - any leprechaun-bearing product involving colourful marshmallow shapes is fine by me. If you have had the misfortune never to try these, get hold of some in Selfridges Food Hall. Believe me.
Posted by Miss Write at 09:59