Two articles from the weekend caught my eye today; the first, a culture piece from the Observer (where I am currently working) started off as a piece about the possibility of books becoming extinct, something I'm very interested in, as a bit of a bookworm-romantic, but became something deeper and more culturally probing as it went on. Read it and you'll see what I mean, it's somewhat of an epic that touches on everything from the popularity of Nintendo DS and the Kindle to novelist Don DeLillo's typing preferences. But the main issue the writer seems to want to explore is the complex subject of internet identity. Why blog, why facebook, why tweet, why leave your mark on one of the innumerable comment sections on the web? Tim Adams looks at the history of this sort of DIY opinion writing, and attributes the attraction to a sort of 'risk-free interactivity' that becomes addictive. As he points out, 'Any writer who has never come up against an editor, or a reader, can always feel himself a genius.'
As a blogger this is a bit of a lightning bolt. It's true, I use this medium to keep writing and putting my ideas out there, but could it also be a sort of safe haven of vanity, mainly accessed by friends and family, hardly ever questioned or criticized? There's certainly at least a grain of truth in that. Adams describes the boredom with the constant internet oversharing of the noughties, citing Lily Allen as an example after her recent departure from blogging and Twitter. Are we getting over ourselves? Do comment if you're a blogger or have any thoughts on this.
The other piece I read with interest was Lynn Barber's Times interview with Lady Gaga. I am a Gaga fan (not hardcore) and I think she proves every time she is given a stage and a mic that she is much more than your average pop puppet. But a combination of lateness and that sort of Hilton-esque blonde insincerity she displays in interviews - it is infuriating when you can tell she does have a decent and creative brain in there - resulted in a rather scathing write-up. I can appreciate that journalists are busy and stars need the publicity, but she is a pop phenomenon in the eye of the cultural storm right now - surely we can give the Gaga slightly more leeway than, say, an X Factor contestant or Hollywood socialite?
I felt Barber was grasping for negative things to mention (the colour of the hairs on her arms and quality of her 'undernourished breasts' are hardly the personal revelations I was hoping for) in a petty reaction to her PR machine and diva image. She didn't mention the new single, was dismissive of her interesting background and was 'bored' by sneak preview images of the upcoming tour. Why become a celebrity journalist if their quirks and creative plans are tedious to you?
This interview links to the other article in that the comments it provoked were neither restrained nor mature. Some defended La Gaga, some dwelled on the layers of artifice she hides behind and some, as always, scrapped amongst themselves by pointing out comment mistakes and arguing with former posts. A couple bothered to make really lame song title jokes. It made me think about Adams's analysis of people's chronic need to comment online. We can't help ourselves; too many years of witty and bitchy thoughts have been repressed and now we have the perfect way to let them out, we can't stop. I thought the very last post on the Gaga page was a fair comment on journalism:

Quite why the author chose this poorly crafted, snide description of the interview process escapes me, as I'm sure it does most other readers; we don't care if you didn't like her or her arm hairs - ask the questions, observe her and her answers and write it down. If we want to know what YOU like and what YOU think we'll buy a newspaper in which YOU are interviewed.
Still, you don't get to where Barber is without putting your stamp on your interviews. I like to see what seems like people of all ages and backgrounds rising to the Gaga's defence though, it shows her cultural potency. I'm very interested in the idea of everyone becoming a writer and critic; while a bit scary for those actually considering it their job, great in the sense of more than a small section of upper-middle class writers having the monopoly on comment and opinion writing. I think in the big web world of comment boards and blogging, it's striking a balance between mean-spirited, letting-off-steam rants and thoughtful participation in the debate.
Feel free to join this debate with the comment facility below, but perhaps skip any musings on the nature of my arm hair.
Despite her undernourished bosom, Gaga managed to blast the X Factor finalists and even Janet Jackson off the stage with her bizarrely wonderful bath escapades. Although it did sort of look like she might eat Dermot at one point. 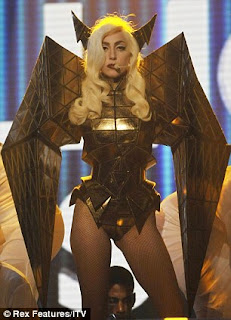